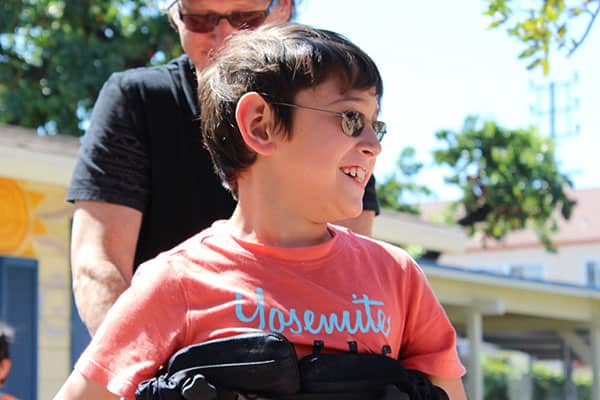 Ask parents of students at the Blind Children’s Center to cite the most important element of their children’s education and you will hear a variety of answers. Some will refer to the small class sizes, others will praise the wealth of available therapies, and still others will point to a certain teacher or specialist who led their child to a major breakthrough.

Pasadena attorneys Anne Bigley and Todd Frealy, who have been married for 13 years, have experienced all of those benefits and more during their eight year relationship with the Center. It started back in 2007 with the birth of their son Christopher. “Our daughter Maddie was two,” Anne remembered, “and we were settling into a new routine with another child in the house.”

Anne and Todd thought something was a little different with Christopher during those early months, but they weren’t sure. “We noticed he startled easily,” Todd said, “and he cried more than Maddie had. But, of course, every child is different.” Over the course of the next two months, Anne and Todd realized Chris wasn’t visually tracking objects properly and they became nervous. They began doing online research and the results were overwhelming.

“We thought Christopher’s symptoms sounded like Optic Nerve Hypoplasia (ONH), but we didn’t want to believe it,” Anne recalled. “He had started tracking objects a bit so we knew he wasn’t completely blind, but we really didn’t know what was going on.” Their pediatrician referred them to renowned ophthalmologist Dr. Mark Borchert, who confirmed the diagnosis of ONH—an underdevelopment of the optic nerve which typically includes endocrine deficiencies, developmental delays, and orthopedic challenges.

Anne and Todd started Chris with physical, occupational and feeding therapies immediately and began receiving services from their local regional center. During their quest for more information, a parent of a BCC alum referred them to the Blind Children’s Center, which would mark a turning point for the entire family.

Anne and Todd, who met at Southwestern Law School, were both working fulltime and, admittedly, Christopher’s needs presented challenges. “Chris wasn’t sleeping well at night,” Anne remembered, “and juggling our schedules just became too much. It became clear that one parent had to stop working, so after ten years as a practicing attorney, I decided to put my career on hold to focus on Christopher’s growth and education.”

It was a difficult decision, but Anne and Todd knew it was the right one. The first call Anne made after resigning was to the Blind Children’s Center. After an initial phone interview, Anne and Todd came in to meet with the Center’s Director of Education and Family Services, Dr. Fernanda Armenta-Schmitt. They were surprised to find out that there was no arduous application process—Christopher would start immediately in the infant class. Losing one income source was a major blow, so the fact that the Center was completely free of charge was a boon to Anne and Todd.

Chris immediately started in the infant class as an 18 month-old toddler, initially attending once a week due to his many therapies. Juggling Maddie’s needs and Christopher’s appointments was challenging, but Anne and Todd made it work for their children. It was during those early months that Chris carved out his first piece of independence.

“The Center’s instructors knew that infants cling to their parents, so they encouraged us to spend time apart from Christopher when we were at the Center,” Anne said. “I would typically go to a parent group where I was able to share our experiences with other caregivers facing similar challenges, while Chris was able to develop on his own in the classroom.” Chris also benefited from interacting with the other children in the infant program, some of whom were visually impaired like him, and some, who were sighted. “The inclusive environment was one major reason we wanted Chris to go here,” Anne said. “That atmosphere is non-existent in most school districts. You don’t want your child in a class exclusively made up of children with special needs. Even if your scholastic environment caters to you, the outside world won’t.”

Christopher’s teachers were careful not to treat him differently than any other students. When he first arrived at the Center, the song “Happy Birthday” would immediately make him cry. So rather than avoid the song, his teacher had the class sing it every day until Christopher eventually came to love it. Today, it is one of his favorite songs. “Adaptability is key,” Anne noted. “You have to adapt or you won’t progress. All of his teachers have been incredible, and I can credit each one of them for adding something unique and special to Christopher’s education.”

Now, as a 1st grader, expectations are high. His speech and literacy skills have improved from year to year and he does much of his work on a desktop computer or an iPad. There is no more nap time, and Chris has homework, tests, and responsibility, just like all of the Center’s students. “He went from being a miserable infant to the happiest child,” Anne said. “He has patience and even when he gets frustrated he pushes through and completes what he needs to complete. Watching that has made me a more patient person. He believes in himself and he knows what it’s like to be successful.”

Chris is looking forward to becoming a 2nd Grader next year. Ask him about his future and he will tell you he wants to be a teacher, a fireman or a doctor depending on the day. “He has no limits on what he sees for himself,” Todd said. “That’s what every parent wants for their child whether they are typically-developing or not. There’s no price tag on that.”

“I didn’t expect some of these things honestly,” Anne admitted. “I didn’t think they were impossible but I had no idea how or when they would happen. And at the Blind Children’s Center, they just made it happen. They just dove in and did it.”

Anne and Todd have high hopes for Christopher today. “We want him to be as independent as possible,” Todd said. “Nothing is written in stone and anything is possible.” Anne agreed, noting that the inclusive environment at the Center has made a world of difference. “He’s so much more confident in himself and his abilities, and he wants to do as much as he can. I don’t know if he would have had that motivation at another school where so much wasn’t expected.”

In less than 15 months, Chris will move on to the 3rd grade at his local public school in Pasadena.  The transition will no doubt be difficult, but thanks to his time at the Blind Children’s Center, Anne and Todd are confident Chris will settle in just fine. “He knows the Center and he loves it,” Anne said. “He gets upset when we talk about going to another school. But from what Todd and I have experienced at the Center these past seven years, we know Christopher can handle it. And we’re ready, too.”