The Future is Bright for Center Alumna 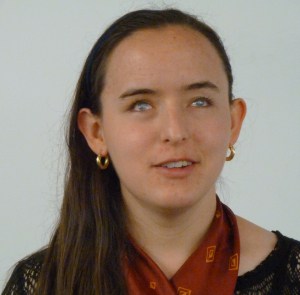 From the moment Karen Arcos, PhD entered the Blind Children’s Center as a totally blind 6-month-old, Karen’s parents and teachers knew she was capable of great things. During her preschool years, Karen worked with BCC’s teachers and specialists to overcome her tactile defensiveness, build her pre-literacy skills, learn braille, and learn to navigate using a white cane. “BCC sparked a sense of openness and curiosity in me, and I knew the world was at my fingertips,” Karen remembers. However, the most important skill Karen and her parents would learn at BCC was how to advocate for Karen’s success.

After Karen graduated from BCC and moved into the public school system, Karen and her parents found that school administrators had placed limits on what they believed Karen could accomplish before even meeting her. Schools refused to allow her to take academically advanced classes, arguing that since the aptitude test was in a visual format, Karen wouldn’t be able to pass. After her parents advocated for an accessible test (which Karen passed with flying colors), administrators refused to modify her class schedule so she could access both honors courses and services for children who are visually impaired at her school. Despite the lack of services offered to her, Karen excelled in her courses and earned a full scholarship to the University of Southern California.

As an undergraduate psychology student, Karen took on an even greater role in advocating for herself. When she inquired about joining the psychology honors program, her professor replied, “I guess you can apply,” and was surprised that she could find her classes or operate an elevator. Karen was not dissuaded and successfully joined the honors program. After seeing Karen’s determination and hard work, the same professor became one of Karen’s staunchest supporters while she applied to Cognitive Neuroscience PhD program at the University of California, Irvine.

While at UC Irvine, Karen devoted herself both socially and academically to improving opportunities for people with disabilities to succeed. She championed diversity programs within her PhD cohort and devoted her dissertation to researching how your senses—or lack of them–impact your ability to remember information. Her research, which was assisted by staff and families from the Blind Children’s Center, could have lasting impacts on teaching methods for children who are visually impaired, as well as in product design for the blind community. “We’re literate people who can function in society if information is provided to us in an accessible form,” Karen said. Karen continues to research uncertainty’s role in memory at the University of California, Santa Cruz as a University of California President’s Postdoctoral Fellow.

Karen’s incredible academic and professional accomplishments can only be outshone by her dedication to helping other people with disabilities build fulfilling lives for themselves. Karen became a junior mentor at the Blind Children’s Center in 2003 and has assisted dozens of children with their braille literacy skills while sharing her insights with their parents. In 2012, Karen co-founded Survive or Thrive, a support program by and for youth with disabilities that helps students with disabilities and their families plan post high school goals as they navigate along their paths toward adulthood. Karen credits the Blind Children’s Center with empowering her parents to constantly advocate for her and teaching her to advocate for herself. “These accomplishments didn’t come by themselves, and I owe who I am today to many people, including the BCC,” Karen said.

“In my own words”

As a totally blind alumna of the Blind Children’s Center, I have served as a Junior Mentor for more than a decade. When volunteering there, I candidly answer parents’ questions in either English or Spanish.

A mother once asked me about my marriage plans. She feared her daughter would not find someone in the world. I told her I would like my husband to be sensitive towards my needs and not someone who would take advantage of me. I also let her know that her daughter would find a significant other while also caring for herself independently, and this confirmation brought tears to her eyes.

I am humbled by parents’ positive comments about me because my goal is to reassure them that their children can be valuable contributors to society someday.

When interning at the Center as an undergraduate at the University of Southern California, I taught a mother and daughter about braille. I introduced a first-grader to the basic use of a portable machine called a BrailleNote Apex, which is analogous to a computer. She learned the keystrokes to navigate menus, open documents, and write within documents in braille. Through our work together, I sought to spark the student’s curiosity in technology while instilling the importance and utility of braille to daily life. I also taught her mother a more advanced form of braille called contractions.

Many parents do NOT know braille prior to coming to the Center and thus support their child’s literacy development less until given a foundation. Despite literacy serving as a crucial means of obtaining information for the general population, ninety percent of blind individuals nationwide do NOT know braille, yet ninety percent of those who do are employed according to the National Federation of the Blind. I would like to increase the number of braille literate individuals. Therefore, my doctoral work in cognitive neuroscience at the University of California, Irvine will involve researching the impact of braille on working memory starting this fall.

Being a Junior Mentor has given me personal growth because I see the results of my efforts while interacting with others. The Center is as important to me as water is to Earth. I hope it continues watering infinite rosebuds in the future.