You are here: Home / Services / Nico, Bright and Social 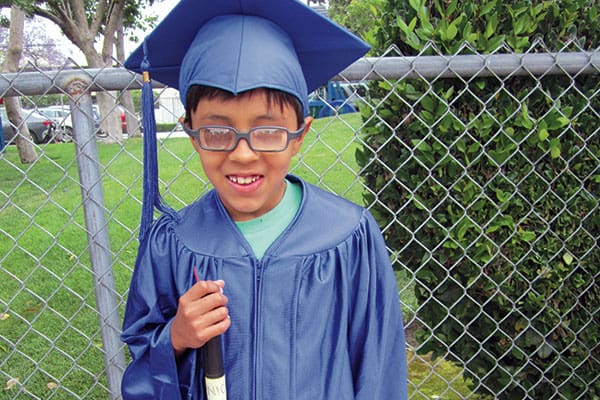 After a year of watching their second child develop, Irma Gomez and her husband Sergio noticed something was different in the way young Nicolas studied objects, toys, and other children. “He would lean in closer or put objects closer to his face than you’d expect,” Irma remembered. “At first, we thought it was just Nico’s unique way of learning and interacting, but soon, we realized something was wrong with his vision.”

Another year of tests, false starts, and conflicting diagnoses followed, until Nico’s ophthalmologist finally pinpointed that Nico was suffering from microphthalmia with retinal dysplasia and hypotony.

Devastating. That’s the word Irma Garcia used to describe the realization that Nico was born with visual impairments that rendered him legally blind. Irma and Sergio began researching their options and trying to educate themselves as best they could. Fortunately, they met the mother of a Blind Children’s Center student at a local low vision event, and she encouraged Irma and Sergio to look into the organization.

Irma brought Nico in to the Blind Children’s Center the very next week for a tour and instantly felt as though she had found the right environment for her son’s early education. “From the moment we walked in, I felt like we were home,” she remembered. “Everyone was so understanding of what my husband and I were going through. It felt like one big family.”

Nico entered the preschool program at the Center and began making strides almost immediately. “Nico is a typically developing child, except for his vision,” said instructor Raymond Ruiz. “Once we got him using a white cane and working on his pre-Braille skills, he really made strides quickly. Nico’s a very bright, social kid, so it was just a matter of finding the right routine and adaptive techniques to get him on the right track. He really blossomed.”

After six years at the Center, Nico graduated from our 2nd Grade Program last year. His parents were so impressed by the small class size and individualized attention he received that they have decided to home school Nico for the foreseeable future. “The home schooling environment allows Nico to work at his own pace and really fine tune his Braille literacy skills,” Irma said.

Nico is now a 3rd grader in the California Virtual Academy (CAVA) which follows California’s state curriculum. For socialization, Nico and his parents attend frequent events with other families whose children are in CAVA. Although Nico is one of only three visually impaired students statewide who are enrolled in the program, he is extremely comfortable with sighted children thanks to the reverse mainstream program at the Blind Children’s Center.

In fact, Nico isn’t the only member of his family to attend the Blind Children’s Center. His younger brother Alejandro was a student for a time and his older sister Isabella graduated from the Center. Both of Nico’s siblings are sighted and attended the Center through our reverse mainstream program. “My other children have learned how to help Nico at home if he needs it,” Irma said, “and, I think it’s made them more sympathetic young people.” After all of her positive experiences at the Center, Irma herself joined the staff here, working for several years as an Associate Teacher.

Last month, Irma recounted Nico’s story to the Center’s Board of Directors. “I wanted to express to them just how important their support truly is. Nico has come so far in the past seven years, I can’t thank the Blind Children’s Center enough. I’ve seen for myself, if you put your love into it, you can really make a difference in these kids’ lives.”