You are here: Home / Who We Are
The Blind Children’s Center is a 501(c)(3) nonprofit organization founded in 1938 by Southern California Delta Gammas. Each year the Center serves approximately 80 children who are blind or visually impaired and provides an array of support services for more than 300 family members. Our goal is to optimize each child’s development and opportunities to lead a meaningful life through a comprehensive program beginning with early intervention, followed by an educational curriculum specifically adapted to the needs of each student.

We are committed to a family-focused approach where parents, siblings, grandparents, and caregivers are included in the educational process every step of the way. In keeping with best practices, our programs are fully inclusive with sighted children integrated in each class, providing unique opportunities for social interaction and acquisition of critical skills. Our multidisciplinary team of experts utilizes leading-edge technology and adaptive devices to help our students who are visually impaired keep pace in the sighted world. As a model program, the Center impacts communities globally through presentations, conferences, and research grants, as well as a full suite of publications for families and professionals. In all, more than 750,000 copies of our publications have been distributed in 75 countries, and translated into 17 languages.

To prepare children who are visually impaired to thrive in a sighted world through inclusive, family-focused early intervention and child development programs. 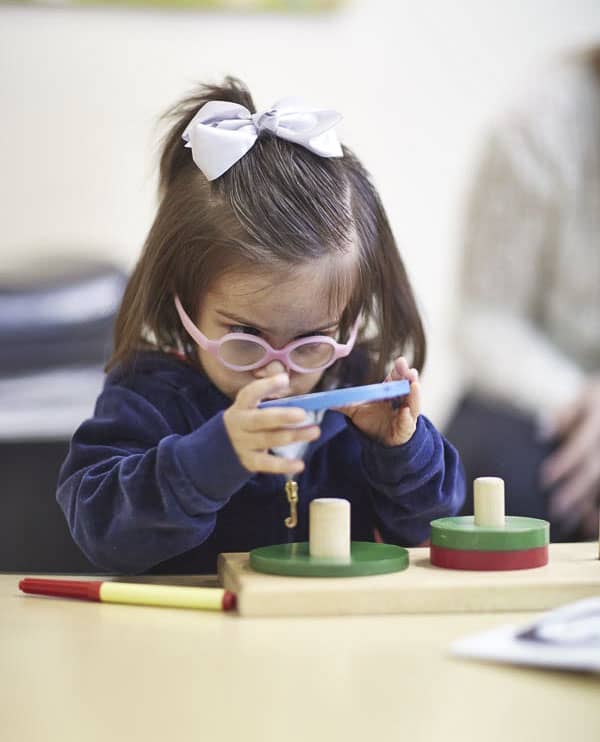 The vision for the Blind Children’s Center developed out of the Delta Gamma Fraternity’s 1936 Convention, where Ruth Billow, a DG from the University of Akron who was blind, stood before the Convention body and requested that “Aid to the Blind” be adopted as their official philanthropy. A committee of Los Angeles alumnae groups united to find a need in the area and discovered that while there were several schools for the blind, no resources existed for preschoolers and their parents.

A team of committed Southern California alumnae volunteers, led by UCLA’s retiring Head of Medicine, Dr. Lillian Ray Titcomb, founded the Nursery School for Visually Handicapped Children in a private home on October 3, 1938. The school was the first of five founded as part of Delta Gamma’s Service for Sight initiative.

By 1940, it was evident that the Nursery School needed to expand in order to effectively serve its students. Dr. Titcomb formed the Cradle Club in 1940, which was designed to meet the needs of infants who are visually impaired and their parents. After changing locations twice, the Nursery School concluded that it needed a permanent building constructed specifically to accommodate preschoolers who are blind.

The Nursery School launched a fundraising campaign at the 1946 Delta Gamma National Convention to bring attention to this need, generating financial support from Delta Gamma chapters in 25 states. Further efforts expanded the fundraiser’s reach beyond the Delta Gamma community and generated publicity for the Nursery School through articles in Photoplay, Screen Guild, McCalls, Look, and the Saturday Evening Post.

The Nursery School soon became nationally recognized as a model program. By 1952, over 2,000 American and international guests had visited the school’s various locations. Medical and educational professionals eagerly came to the Nursery School to learn from the teachers’ practical experience with children who are visually impaired and study the school’s educational methods.

That same year, a Building Committee was formed to find a location and an architect for a permanent facility. Paul R. Williams, one of the finest architects of his generation, was chosen for the project, providing his skills at a reduced fee due to the philanthropic importance of the project. The Nursery School’s dream building, and the current location of the Blind Children’s Center, opened in 1953 based upon Mr. Williams’ original design.

Additions to the school program and several new projects developed over the next few years. A residence program was designed to accommodate children from remote areas. Recognizing the need for a holistic approach, psychologists, social workers, and other professionals were added to the existing staff to provide a support system for the entire family. In 1966, the name of The Nursery School was changed to the Blind Children’s Center to reflect this wide range of comprehensive services.

Thanks to the generosity of the Margaret Bundy Scott Trust, in 1984 the Blind Children’s Center expanded its services again through the development of educational and medical outreach programs. The Center established itself as a research hub and published numerous booklets, videos and CDs designed to educate and support parents of children with visual impairments and other professionals working in the field. To date, over 750,000 booklets have been translated into 17 languages and have been distributed to individuals and groups in all 50 states and more than 75 countries.

The structure of the Blind Children’s Center changed again in 1988 when an inclusion model was introduced. From that point forward, children who were sighted learned alongside children who were blind or visually impaired in each classroom, fostering an environment of compassion and empathy for all students.

In fall 2018, we returned to our roots to focus on early education, from birth through age 5, in order to provide our students with a strong foundation as they continue their educational journeys. As we enter our next 80 years of service, we remain grateful to the Delta Gamma Fraternity for launching the Center and continuing to support our work through fundraising and volunteers, our community of supporters for sustaining the work we do, and our students and families for inspiring us to continuously improve.

We invite you to join us in preparing our students to thrive!

Thank you to Jennifer Magro Algarotti, PhD, Director of Strategic Communications at the Delta Gamma Foundation, and the DG Foundation archives for their contributions to our history.